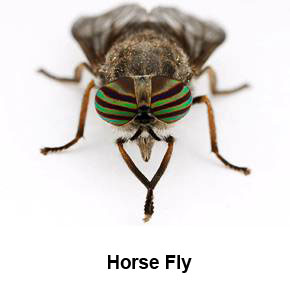 What is a fly? While most winged insects have four wings, flies have only two wings. A fly has mouthparts designed to suck up liquids and for piercing, if the fly is one that bites other animals.

Like mosquitoes, biting flies locate humans and other animals by sensing certain substances, including the carbon dioxide and moisture in exhaled breath, dark colors and movement, warmth and perspiration. Once a suitable host is located, a biting fly inserts its piercing mouthparts, lacerates the skin, then injects its anticoagulant-containing saliva to keep the blood flowing.

DEER FLIES and HORSE FLIES (Tabanidae)
Deer flies are one of the few types of flies that transmit disease to people in the United States. Tularemia, also known as “rabbit fever,” is a bacterial disease that can be acquired from contact with objects or infected animals, from the bites of ticks and, occasionally, from the bites of the deer fly, Chrysops discalis.

Deer flies are most prevalent in the spring. They are medium-size flies, approximately ¼-inch long, about the size of a house fly. They are typically yellow-brown to black with dark bands on their wings. The eyes of some deer flies and horse flies are iridescent green.

The maggot-like larvae (immature stage) of deer flies are aquatic. The adult flies are often encountered along trails near streams, lakes, ponds, marshes and swamps. They can be quite bothersome, buzzing around a person’s head, especially where large numbers are present. Both deer flies and horse flies bite with scissor-like mouthparts that cut into skin, causing blood flow which the flies lap up. Because of this relatively crude means of obtaining blood, the bites can be painful.

Horse flies can be an inch or more long. Some are entirely black. Others, known as “greenheads,” are light brown with shiny green eyes. Horse flies are strong, fast fliers that feed on the blood of livestock and other animals. Like deer fly larvae, the larvae of horse flies usually live in water or moist locations where they prey on other insects, grow and migrate to dryer soil to undergo the pupal (cocoon) stage. The life cycle may take two years to complete.

STABLE FLY (Stomoxys calcitrans)
The stable fly is a about ¼-inch long and gray with four dark stripes on its thorax (behind the head). This fly looks like a house fly, except for the pointed proboscis beneath its head through which it sucks blood. They are most abundant in late summer and fall, and will fly several miles to bite livestock (hence the name), pets and people. They typically bite in early morning or late afternoon and often attack the ankles, inflicting a sharp, stabbing pain.

Stable flies lay eggs in piles of rotting vegetable matter, such as haystacks, grass clippings, manure and vegetation along shorelines. Like the adults, stable fly larvae are nearly identical to the larvae of house flies.

Adult black flies are small, no more than 1/8-inch long with broad wings and a humpbacked appearance. Like other flies, black flies are creatures of moist environments. Also known as “buffalo gnats,” they are usually encountered near creeks and rivers where the larvae attach to submerged stones.

Black flies will fly up to 10 miles in search of blood. They do not transmit disease to humans in the United States. However, injury from black fly bites can threaten the lives of livestock and even people when present in very large numbers, typically in late spring and early summer. Deaths have been reported from allergic reactions and blood loss from the bites, and even from inhaling the flies. Black fly bites often cause considerable swelling and bleeding, may be itchy and slow to heal. They prefer to attack the head and where clothing fits tightly.

Biting midges should not be confused with other midges (Chironomidae) that are much larger and resemble mosquitoes but do not bite. The biting midges are much smaller, being no more than 1/32 of an inch long. They are also known as “punkies,” “no-see-ums” or simply “gnats.” Their tiny size allows them to penetrate window and door screens. Biting midges can be serious pests along the shores of oceans, lakes, ponds and rivers, and will bite during the day or at night.

The minute, worm-like larvae of biting midges live in moist sand or soil, rotting vegetation, tree holes and other damp situations often at the edges of ponds, marshes and lagoons. Several species will suck the blood of humans, while other species suck the blood of insects, including mosquitoes.

Sand fly larvae are tiny and worm-like, living in moist decaying plant matter, moss, mud or in water. Adults are long-legged, no more than 1/8-inch long, hairy and brown to gray with wings that form a “V” shape when the flies are at rest.

Most sand fly species feed on the blood of mammals, reptiles and amphibians at night. In many parts of the world, including southern Texas in the United States, certain sand fly species (Lutzomyia) are suspected of transmitting cutaneous leischmaniasis, a disfiguring protozoan disease of humans.

Area-wide control of biting flies can be difficult due to the hidden habitats in which the larvae are found, and because some adult biting flies may fly miles from their larval habitats. Nevertheless, sanitation can be an important method of controlling some biting flies. The larvae of stable flies, for example, develop in piles of decaying hay, straw and other vegetation, including manure containing plant matter. These potential sites for larval development should be eliminated where practical. Other flies (biting midges and sand flies) may be controlled by disposing of decaying vegetation containing their larvae.

Exclusion also can be employed against biting flies. Stable flies are known to enter structures in search of blood meals, so screens should be installed and maintained on windows and doors. However, the mesh of standard household screens is not fine enough to keep out the tiniest biting flies and should be replaced with finer mesh where these flies are a problem.

The use of fly paper is limited as it is not as attractive to biting flies as are warm-blooded animals. Fans may be a more useful means to help keep small areas free of flies, especially smaller flies whose flight is affected by air currents. Similarly, burning candles and torches that produce smoke and air currents may help keep the smaller species away.

Pesticide application is of limited use in controlling biting flies. Ultra-low volume (ULV) treatments (such as “fogging” for mosquitoes) and space sprays of non-residual pesticides are best used where flies are numerous and concentrated in a relatively small area. These materials kill only on contact and quickly decompose, leaving the treated area unprotected soon after application.

Residual pesticides can be used to spray surfaces where flies are resting, such as vegetation, the walls of barns and the exterior walls of houses. But this method will do little good if flies are not landing on these surfaces.

Another chemical control is larviciding, the application of pesticides designed to kill fly larvae. Formulations containing Bacillus thuringiensis (such as BTI) or growth regulators (such as methoprene) have been widely and successfully used against mosquito larvae living in the stagnant water of ditches, lagoons and catch basins. BTI has been used successfully against black fly larvae in streams.

The use of repellents to combat biting flies should be supplemented with other preventive methods, such as avoiding areas inhabited by the flies, avoiding peak biting times, and wearing heavy-duty, light-colored clothing including long-sleeve shirts, long pants and hats. When black flies, for example, are numerous and unavoidable, netting that covers the head, like the “bee bonnets” used by beekeepers, can provide protection. Smaller biting flies, such as biting midges, may become stuck in heavy coatings of lotions or oils applied to skin.

Despite the use of various control methods, control of biting flies is seldom complete. But by supplementing preventive measures with fly management, bites from these vexing pests can be avoided.

NOTE: When pesticides are used, it is the applicator’s legal responsibility to read and follow directions on the product label. Not following label directions, even if they conflict with information provided herein, is a violation of federal law.